India Rush took on PIFA Sports in Match-14 of the WIFA Women’s Football League. PIFA won their last match, and entered the pitch with a target of another 3 points, while India Rush came into this match searching for their first point of the campaign.

The match started on a high note, with both sides trying to draw blood first, but neither of them could take advantage of their chances. PIFA launched an all-out attack but fell short as India Rush’s defense was on top. India Rush offered little in the final third, but the opposition defenders stood firm and removed any India Rush threat. The first half ended in a stalemate.

The same story of the first half continued in the second half as well. Again both the teams got a fair amount of chances but could not create anything. Chances were at a premium for both sides, but both sides’ defense was well organized and solid, thus both sides shared a point each. 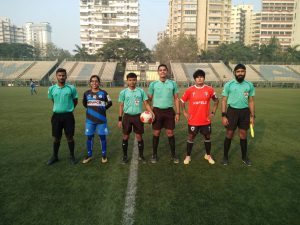 Next Sports Academy then tried to bounce back and put up a good fight but could not score. In the 39th minute of the match, Vaishnavi scored again and completed her hat-trick. She did not give any room to breathe to the opposition defense. With Vaishnavi’s first-half hat-trick, Krida Prabhodhini went inside the dressing room with a comfortable 3-0 lead.

Next Sports Academy tried to get a goal back but failed to materialize the move. The referee blew the final whistle and Krida Prabhodhini won the game comfortably.