27th December, Mumbai: In the WIFA Women’s Football League, 2 matches took place on Boxing Day. In the first match, S.P. Football Academy registered a big win against Snigmay FC & the second match of the day ended in a goalless draw between Kenkre and Footie First.

Thane-based S.P. Football Academy created a flurry of attacks from the very first whistle. Valencia D’Mello scored for them in the 32nd minute. Snigmay FC, after conceding, fought hard for the equalizer but did not get it & the first half ended with a 1–0 score in favor of SP Football Academy. 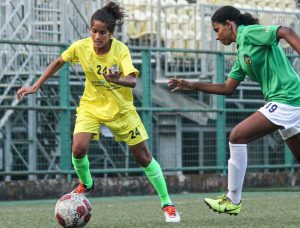 In the second game of the day, the two Mumbai teams face each other as a Footie First take on Kenkre FC. After the disappointment of the previous match, both teams entered the field with one goal: to return to winning ways.

The match kicked off with high intensity and both the teams got their chances but both failed to break the deadlock in the first half.

The same story continued in the second half as well and the defense of both the teams did their job well. Both the teams failed to score and had to share points after the final whistle.