A historic day for football in Maharashtra witnessed the U-18 team clinch the Dr BC Roy Trophy (Tier II) beating the formidable Arunachal Pradesh and Tamil Nadu in the Semi Finals and Finals respectively.

The Dr BC Roy Trophy, happening at the high peaks of Himachal Pradesh, hosted 19 teams. Divided into 4 groups, Maharashtra was placed in Group-B alongside Chandigarh, Bihar, and Pondicherry.

Team Maharashtra played their first match against Pondicherry on 11th of December. With a clear intent of bagging a win, Maharashtra started well. During the initial half, Pondicherry committed numerous fouls to stop the opposition attack. In fact, Maharashtra came very close to scoring. As many as three of their attempts were deflected off the woodwork. The match concluded with a goalless draw which accounted a point each for both teams. Commenting about the draw, Maharashtra’s coach Mr Abha Kadam quipped, “I think Pondicherry fielded with an intent to take a point. Our boys played their hearts out, and we were clearly the better team. I term this result as a unlucky draw and I’m hopeful we’ll bounce back harder in the upcoming game”

Mr Abha Kadam’s comments were no pretence. The second game of the campaign was scheduled against Bihar. With a huge margin, Maharashtra outplayed them. The U-18 boys thumped 5 goals past Bihar which gave a major boost to their qualification hopes to the knockouts. Maharashtra’s Zeeyan Naverakar, a sturdy forward, who now has scripted his name for the National Camp selections, scored 4 goals. Raul Almeida opened the scoring for Maharashtra early in the 2nd minute. Maintaining the solitary goal lead, Zeeyan found his first goal of the tournament at the 44th minute. Maharastra were up by 2 goals at half time.

In the second half, Zeeyan’s heroics abled Maharashtra to clinch a commendable win. Launching rampant attacks in the opposition’s defensive half, Bihar’s back-line succumbed to keep them on check. Zeeyan scored his second goal at the 56th minute. Following his second goal, he completed his hat-trick at the 84th minute and put the final nail in the coffin when the match was 84 minutes old. “This is what our team is capable of doing. I’m glad that the boys kept their calm and went on to focus on their capabilities. I think the entire team was phenomenal and everyone mattered in getting us the first three points of the tournament” explained Mr Kadam, who spoke effervescently after the first win. 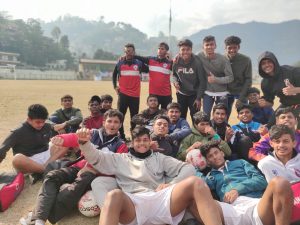 Maharashtra continued their winning streak. The team qualified to the semi-finals beating Chandigarh in an exciting 2-1 victory. The third game for Maharashtra came off a bit sloppy yet exuberant, as the boys came from behind to book a ticket to the Semi Finals. Chandigarh broke the deadlock at the 37th minute. Their only goal was the difference between both sides as they headed to the tunnel after the initial 45 minutes. However, in the second half, Sujal and Zeeyan turned the tide. Maharashtra’s star striker Zeeyan, equalised at the 55th minute. Following him, captain Sujal led his team to victory by scoring the second goal at the 59th minute. Maharashtra’s capable midfielders and robust defenders maintained the lead and the final whistle from the referee opened the doors for their semi final conquest. “This is a historic moment for football in Maharashtra” claimed the Head Coach after his team entered the semi finals of the Dr BC Roy Trophy.

For the first time in many years, team Maharashtra qualified to the Semis of the Dr BC Roy Trophy (Tier II). An uphill task awaited as the opponents were the lethal Arunachal Pradesh. The high intensity match kicked off in Mandi where the Western Brigade locked horns against a commendable North Eastern State. With the initial exchanges, Maharashtra’s focus was to score the first goal. Zeeyan Hanif Nevrekar, the scoring machine, did the unthinkable. Zeeyan gave Maharashtra the lead at the 36th minute of the game. His goal edged Maharashtra ahead in the first half. During the second half, Ravi, Suraj, and Satish were challenged quite a few times, but their strapping stature in defence successfully kept the opponents at bay. To everyone’s astonishment, at the 82nd minute,  Zeeyan, the top scorer of Maharashtra, whipped the Arunachal defence yet again to assure a slot for them in the grand finale. Arunchal did have an immediate reply, but their only goal at the dying minutes didn’t bear the fruits.

Maharashtra faced the mighty Tamil Nadu in Finals today. The match kicked off at 14:15 IST in Mandi, Himachal Pradesh. With a enriching experience of many praiseworthy outings, the boys were charged up since the commencement of the game today. It was an end to end affair in the first half. Having created many chances, both the teams failed to find the goal. The first half ended in a goalless affair. In the second half, Maharashtra’s Aditya Shah broke the deadlock at the 59th minute. His only goal was the decider between both the sides. “We dedicate this win to the people of Maharashtra. Beating the likes of Arunachal Pradesh and Tamil Nadu showcases the potential Maharashtra has. Our players played their hearts out and we are very satisfied with the result.” said the Head Coach of the Maharashtra U-18 team, who guided the team to victory.

With this win, Maharashtra has qualified to the Tier I of the Dr BC Roy Trophy, where they will face the powerhouses of football in India.