SP Football Academy continue to go strength to strength with another strong performance as they condemned Krida Prabhodhini to their first defeat of the campaign.

Facing a tough opponent in Krida who were unbeaten in the league so far, SP Football Academy broke the deadlock at the end of the first half when Ritika’s strike found the back of the net. Krida didn’t take long to make a comeback as they rushed out to attack in the second half before finding the equalizer 10 minutes into the half. A string of passes ending with Purva Gaikwad finding the net for the 3rd time in the campaign.

The game stretched out to end-to-end football with both sides looking for a winner. However, in the 75th minute, Referee Sufiyan Khan awarded SP a penalty for a foul in the box. Valencia stepped up for the spot-kick and converted it with ease to put SP in lead for the 2nd time in the game. The match eventually ended at a 2-1 scoreline with no further goals. 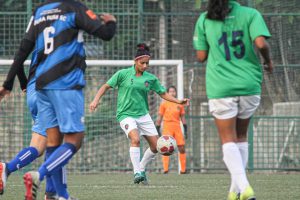 In the 2nd game of the day, Kenkre were left to rue their missed chances as a late injury-time goal from India Rush forward Tanvi meant the game ended in a 1-1 draw.

The game began with Kenkre taking the early charge and were soon rewarded when Pranita Nimkar scored her fourth goal of the campaign to make it 1-0 in the 11th minute. Kenkre continue to look for goals to double the lead while India Rush threatened on the counter. As the game progressed India Rush grew into the game and were finally rewarded in the injury time when Tanvi R converted her chances to make it 1-1. The game ended with both sides sharing the spoils.

Having started off brightly with 2 comfortable wins, Kenkre FC seems to have hit a roadblock securing just 2 points in the next three games. Meanwhile India rush continue to search for their first win of the campaign